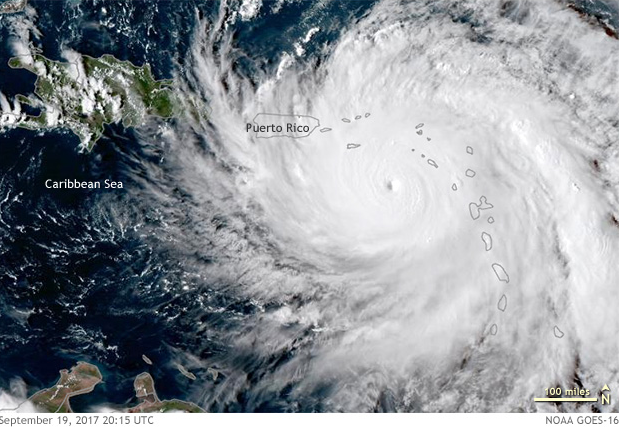 Hurricane Irma passed near San Juan, Puerto Rico, on September 6, 2017, and though the island missed the worst of that storm, it brought heavy rains and wind gusts up to 100 miles per hour, leaving two-thirds of the island without electricity and one-third of the population without clean water. As the island was still coping with the aftermath of Irma, Hurricane María made landfall in Puerto Rico on September 20, 2017. The storm had already caused widespread destruction throughout the eastern Caribbean as a Category 5 storm, and it alternated between Category 4 and 5 as it approached Puerto Rico. When María reached the island, it was a Category 4 storm. As the eye of the storm passed over Puerto Rico, the intense winds broke and uprooted trees, severely damaging 95 percent of their cell towers thereby cutting off nearly all cell phone communication, destroying what was still functioning in Puerto Rico's electrical grid after Irma, and leaving all residents across the island without power.

Over 48 hours, María dropped 15 to 20 inches of rain in most areas, with some locations receiving even higher amounts. High velocity water washed out roads, bridges, culverts, and low water crossings; caused landslides and mudslides; and damaged other ancillary road elements on facilities owned, operated, and maintained by the Puerto Rico Department of Transportation and Public Works (DTOP). In conjunction with FEMA and DTOP, the Federal Highway Administration Eastern Federal Lands Highway Division (EFLHD) initially performed emergency repairs to reestablish critical transportation links, and is currently managing a program to continue the repair process on hundreds of roadway and bridge locations throughout the island. The goal of this project is to restore roadways and bridges damaged by Hurricane Maria to their pre-disaster conditions, and where applicable, to identify additional improvements that will help mitigate damage caused by future hurricanes or other natural disasters.

WSP is leading one of the four teams assisting EFLHD with this recovery process, and at the October 22nd Transportation Committee meeting, Robert Kalbach, WSP's program manager, will discuss the overall program and WSP's experience on the project.

About the speaker: Robert Kalbach, PE, ENV SP, manages the civil department in WSP's Herndon, Virginia, office. Additionally, he is this year's Chair of the ASCE NCS Transportation Committee. Mr. Kalbach has diverse experience in program/project management and engineering design, developing projects from the planning phase through final construction documents. He is focused on providing a big picture perspective to effectively balance project needs and requirements with the challenges imposed by existing conditions and political/funding constraints. He has a degree in civil/structural engineering from Lehigh University in Bethlehem, Pennsylvania, and has been working for WSP in Herndon for over 24 years. NOTE: Representatives from EFLHD's Sterling, Virginia, office may also be available for the presentation, though that confirmation is still pending.