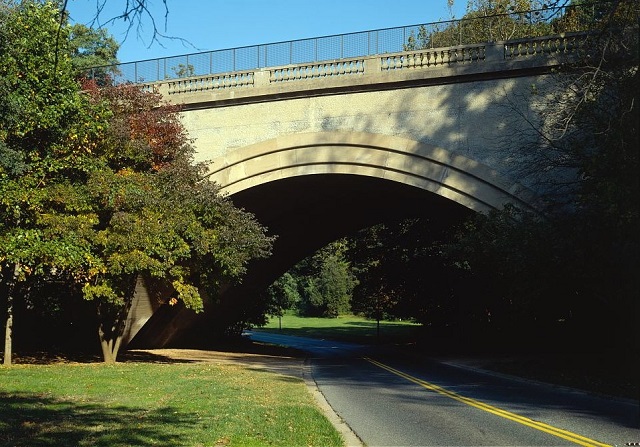 This bridge was the first parabolic arch constructed in the United States, and the longest in the world at the time, according to its designer, W.J. Douglas. Its concrete masonry, faced with sandstone and granite pebble aggregate, conforms with the model for park crossings established by the Connecticut Avenue Bridge (1897-1907, HAER No. DC-6). 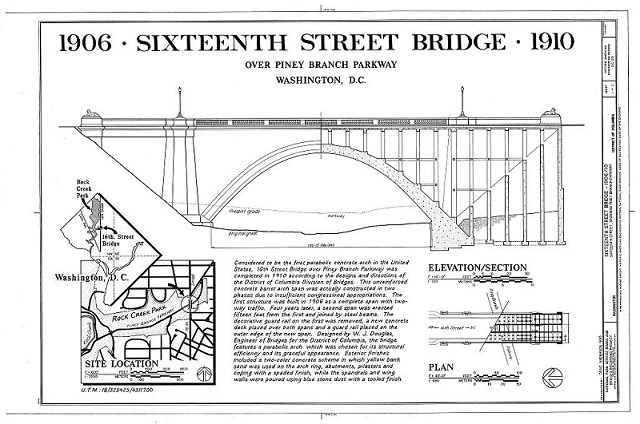 The bridge's final design was by Douglas and city engineer William N. Reynolds.  Their design for the concrete bridge indicated a span 125 feet (38 m) long and a road deck 20 to 25 feet (6.1 to 7.6 m) wide, finished with as much ornamentation as their budget would allow.  The completed bridge would be 272 feet (83 m) long, with a 25-foot (7.6 m) wide road deck. The 125-foot (38 m) long span would rise 60 feet (18 m) above the valley floor. The bridge would be made of reinforced concrete and steel, with hollow spandrels between the arch and abutments. The roof and walls of the arch and the walls of the abutments ranged from 10 to 20 inches (25 to 51 cm) in thickness. Square columns, 2 feet (0.61 m) in length on each side, supported the road deck, and were linked internally by a latticework of 1 square foot (0.093 m2) horizontal concrete beams (which helped to compress the arch and keep it stable as well push outward against the walls). 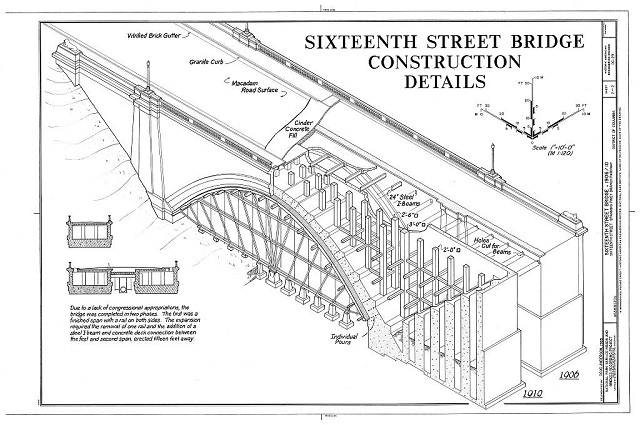 Originally designed as a single-span bridge for two-way traffic, DC commissioners from the outset had planned on two separate spans.  During the course of construction a second span was added, although the completion of construction of the second span moved forward in fits and starts.  From its original design in mid-1905, construction moved to completion and the 16th Street Bridge opened to traffic on April 15, 1909.

Rehabilitation has been done on the bridge in the years since it was constructed.  Most recently, in October 20, 2014, District of Columbia Department of Transportation (DDOT) engineers recognized that the bridge was structurally deficient, showing signs of aging, including cracks.  As part of a major transportation renovation project, the mayor and the DDOT announced a $12 million, 11-month bridge repair project. Initial work on the bridge began on October 23, 2014.  DDOT replaced the deck, most of the interior beams and columns, the walls of the abutments, and the wing walls. The beams and most of the concrete forms were prefabricated off-site, speeding construction. The work closed two bridge lanes, leaving just a single lane in each direction. The closures were off-peak only until February 2015, when major work began. The bridge was completed and reopened on July 1, 2015.