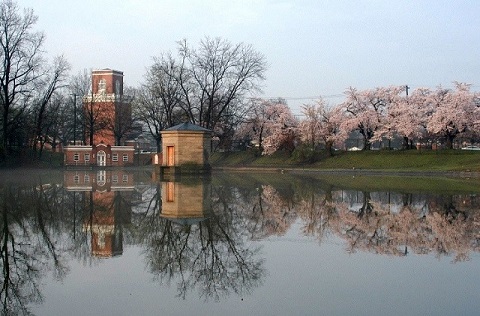 The walking tour was hosted by Mr. Thomas Jacobus, P.E., General Manager of the Washington Aqueduct.

The Washington Aqueduct produces drinking water for approximately one million citizens living, working, or visiting in the District of Columbia, Arlington County, Virginia, and the City of Falls Church, Virginia, and its service area. A division of the Baltimore District, U.S. Army Corps of Engineers, the Aqueduct is a federally owned and operated public water supply agency that produces an average of 155 million gallons of water per day at two treatment plants located near the Dalecarlia Reservoir and the McMillan Reservoir both in the District of Columbia. Construction of the system began in 1853 under the supervision of Montgomery C. Meigs. The Corps was responsible for its design, construction and, starting 1859, its operation. The system has been in continuous use under the Corps ever since. It is listed as a National Historic Landmark, and the Union Arch Bridge within the system is listed as a Historic Civil Engineering Landmark. Since its construction, the Corps has substantially expanded and improved the capacity and function of the Aqueduct from its original mission of supplying raw river water to a sparsely populated District of Columbia to today's mission of providing safe drinking water to a much larger and more populous service area. For more information please see:  http://www.nps.gov/choh/learn/historyculture/thewashingtonaqueductsystem.htm