Ahmet Zeytinci, P.E., Ph.D., Fellow-NSPE, Fellow-ASCE is an award-winning professor, structural engineer, author and mentor living in Washington, D.C. Since joining academia, "Dr. Z", as he is known by his students and colleagues, has distinguished himself on campus and beyond. He is passionate about engineering, gifted in teaching, and is a true champion for professional licensure. Dr. Z. has extraordinarily high standards; has produced award-winning designs; is prolific in professional service; and infects others with these same values. He is the recipient of numerous local, regional and national awards, including recent national awards from the National Society of Professional Engineers (NSPE) and American Society for Engineering Education (ASEE). Since 2014, he has been regularly writing monthly articles for “Dr.Z’s Corner “ and offering hundreds of engineering problems, for free, every month for students, engineers and engineering educators worldwide. Dr. Z. also offers pro-bono Saturday classes for students and engineers; his free classes are open to all in the greater Washington metro area and cost nothing, nada, zilch! Starbucks coffee is always a must have for Dr. Z.

This month’s article is written by Dr. Vagelis Plevris, Associate Professor and Head of the Research Group “Structural Engineering” at Oslo Metropolitan University (OsloMet) in Oslo, Norway. Oslo is one of the fastest-growing capital cities in Europe and so is OsloMet, Norway’s most urban and third-largest university, with more than 20,000 students and over 2,000 employees with research activities in areas that are important for welfare and value-creation, such as health, education, social sciences, technology, and design, committed to making a positive-impact in the Oslo region, in Norway and around the world. 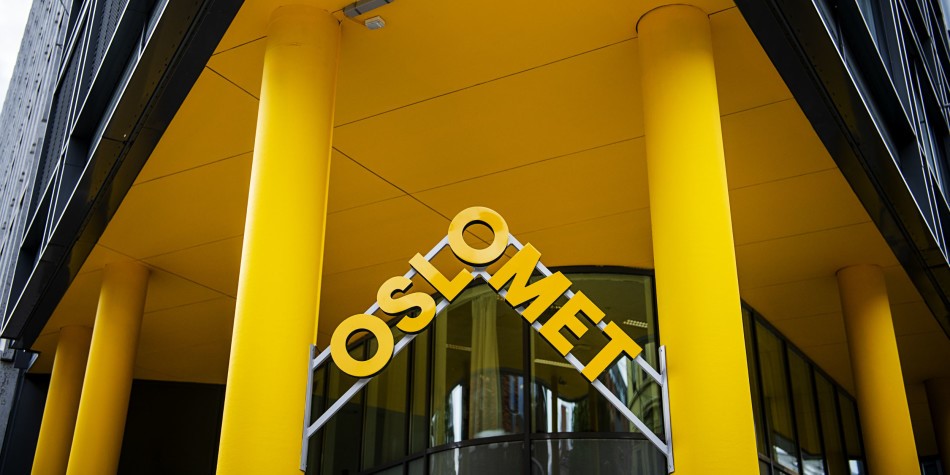 Dr. Ahmet Zeytinci (Dr. Z), my colleague and friend, arrived at my home in Oslo, Norway, as he prepared for his visit with the Department of Civil Engineering and Energy Technology of Oslo Metropolitan University (OsloMet). I would like to share with you all a brief glimpse into our adventures and experiences over the course of his week-long visit.

Dr. Z had the opportunity to teach students of the master’s degree Program in Structural Engineering and Building Technology. He was a guest lecturer in my class “Finite Element Method in Structural Analysis”. The students were very enthusiastic to be taught by Dr. Z, learn about his special techniques and “Gorilla” formulas and listen to his amazing success stories and his advice on how to advance in the profession! 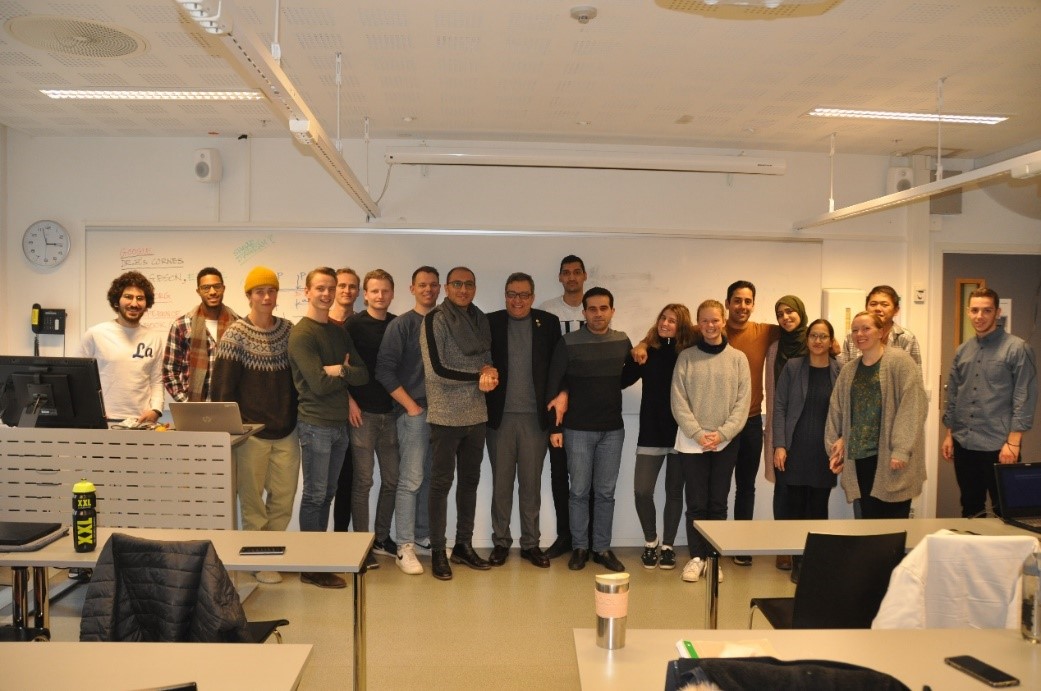 On Wednesday we visited Holmenkollen, a neighborhood of Oslo, with its famous ski jumping hill, the Holmenkollbakken. Holmenkollbakken is a large ski jumping hill with a capacity for 70,000 spectators. Holmenkollen has hosted the Holmenkollen Ski Festival since 1892. The hill has great engineering interest. It has been rebuilt 19 times. During the Second World War, the venue was used as a military installation, but upgraded in the late 1940s. Further expansions were made ahead of the 1966 and 1982 World Championships, as well as in 1991. Between 2008 and 2010, the entire structure was demolished and rebuilt. The tower construction material is steel while grandstands are made of steel and concrete. It is the only steel ski jump in the world today. A total of 1,000 tons of steel was used in the whole construction. The new design by JDS Architects won the Norwegian Steel Construction Prize and the ECCS (European Convention for Constructional Steelwork) Structural Steel Design Award in 2011. 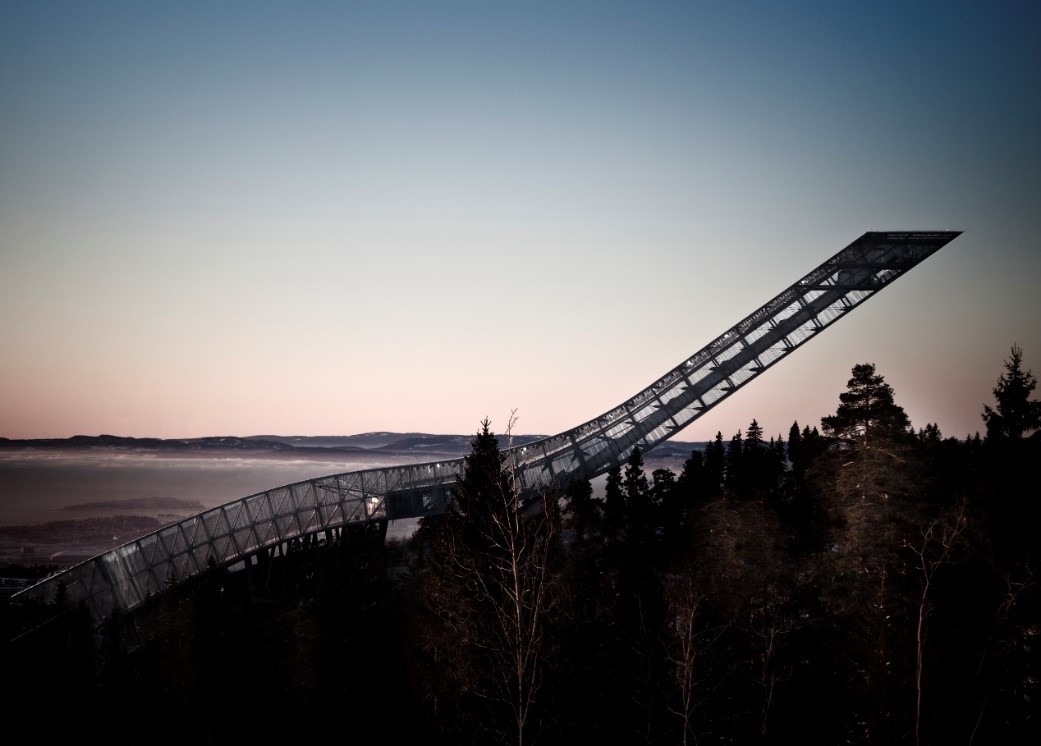 On Thursday, Dr. Z had meetings with the Head of the Department of Civil Engineering and Energy Technology of OsloMet, Dr. Hallgrim Hjelmbrekke, and myself, the Head of the Research Group “Structural Engineering”, where we had fruitful discussions on topics related to civil engineering education and excellence in professional engineering. Dr. Z gave a very interesting and inspiring presentation to staff members of OsloMet where he spoke about the Professional Engineering (P.E.) exam of NCEES in the US, Dr Z’s Corner, his university and others. Among other topics, we discussed the opportunity for OsloMet to organize local NCEES F.E./P.E. exams in Norway in the future. 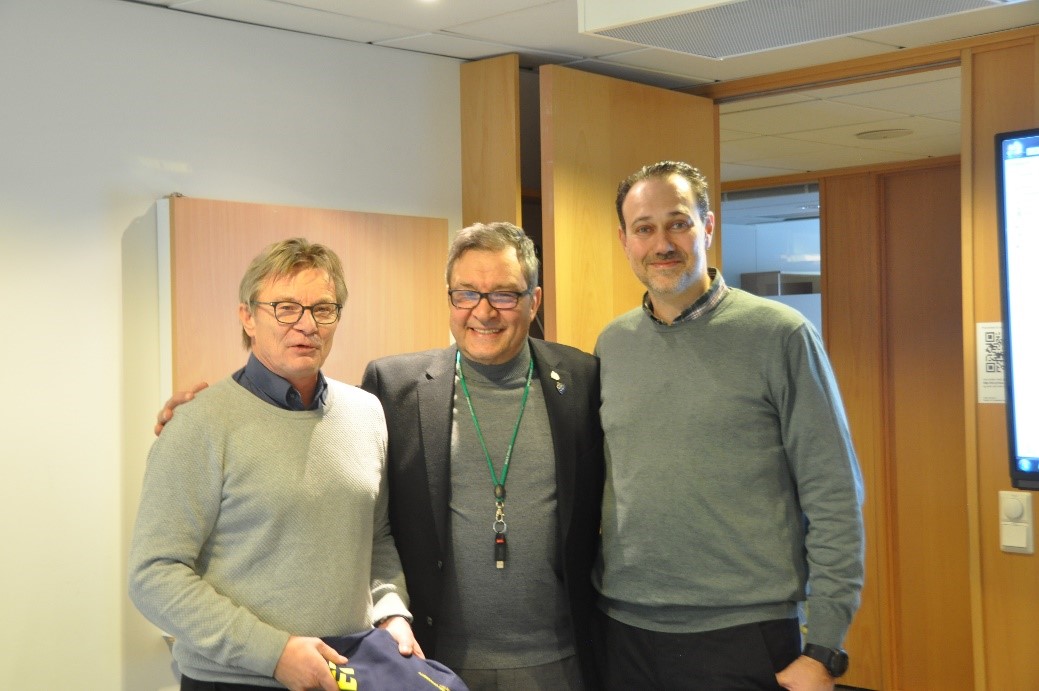 On the same day we visited the climbing wall in Building P35 of OsloMet. It is a permanently installed climbing wall that students and staff can try for free. Work-life balance is very highly valued in Norway and climbing is a very good relaxation from everyday life. The climbing wall is available to all students and staff associated with all faculties. With a height of 19.3 meters (63 ft), it is among Norway’s tallest indoors climbing facilities and it is divided into three sections consisting of climbing routes with difficulty levels from 4 to 7 according to the International Climbing and Mountaineering Federation (UIAA) grading system. The grades are from 1 to 10, with grade 1 being the simplest and grade 10 being the most difficult. 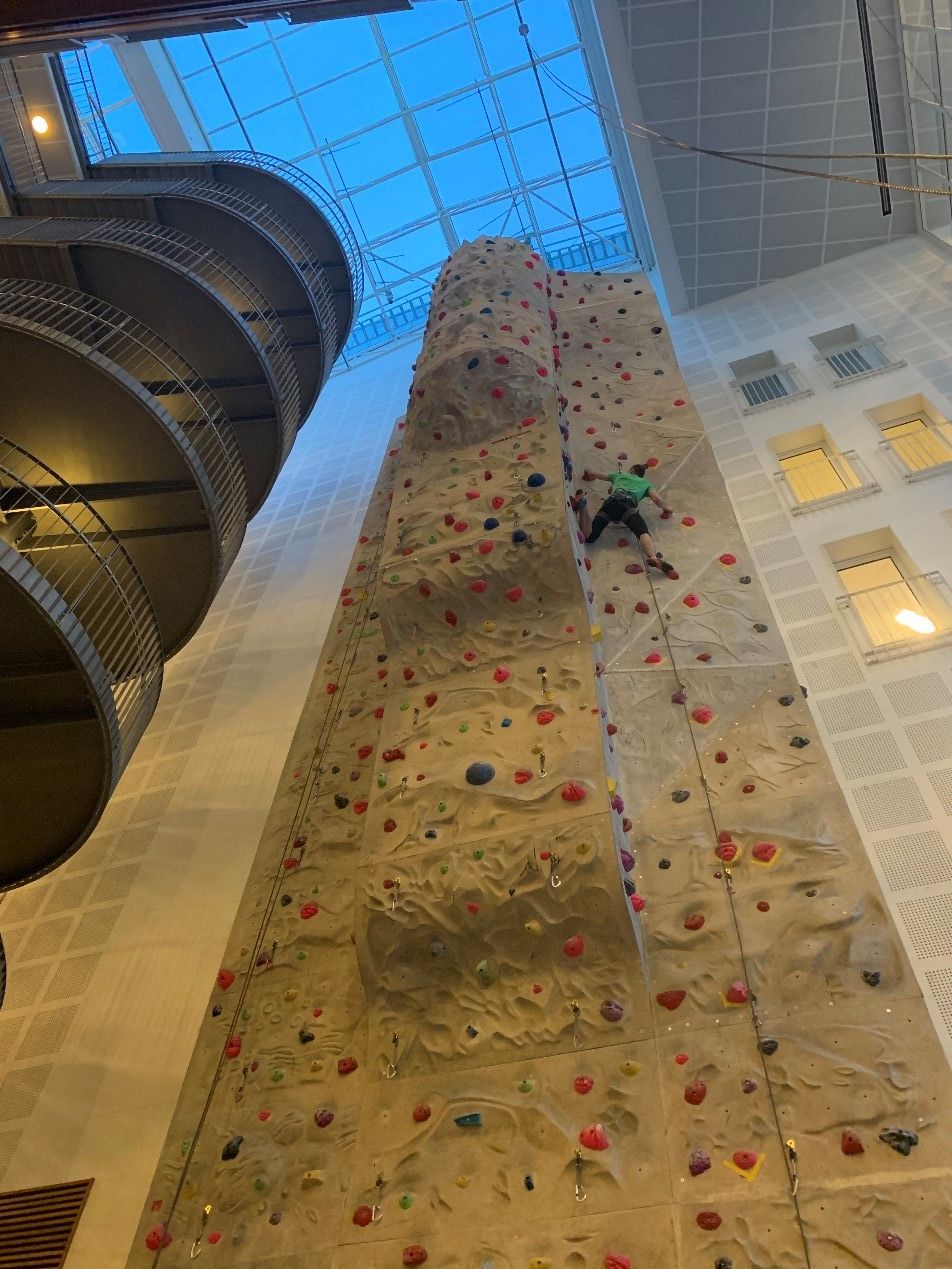 Equinor (previously Statoil) is Norway’s largest oil and gas company. The architecture of their new office building in Fornebu, right outside Oslo, completed in 2012, is inspired by offshore steel constructions. The building is made out of five lamellae of equal size, each stacked on top of one other, with a total area of 117,000 sq. meters (1.26 million sq. feet). The concept minimizes the environmental footprint of the building and gives a generous amount of space to the park.

Each lamella is 3 stories high, 140 meters long and 23 meters (75 ft) wide. The modules are oriented differently to optimize internal daylight conditions and views towards the fjord landscape. Inside, the modules create a communal atrium, with an “urban plaza” connecting many of the social functions on the ground floor. The design is rooted in the democratic principle of bestowing all users of the building with excellent working conditions that include stunning views and good light conditions.

The steel superstructure enables the different modules to cantilever up to 30 meters (98 ft). The façade consists of about 1600 prefabricated elements with integrated windows, insulation and solar shading, a highly energy efficient solution with no visible fixings in the entire facade. Although an untraditional office building, the Equinor offices represent typical Scandinavian values by emphasizing democratic values and social equality. 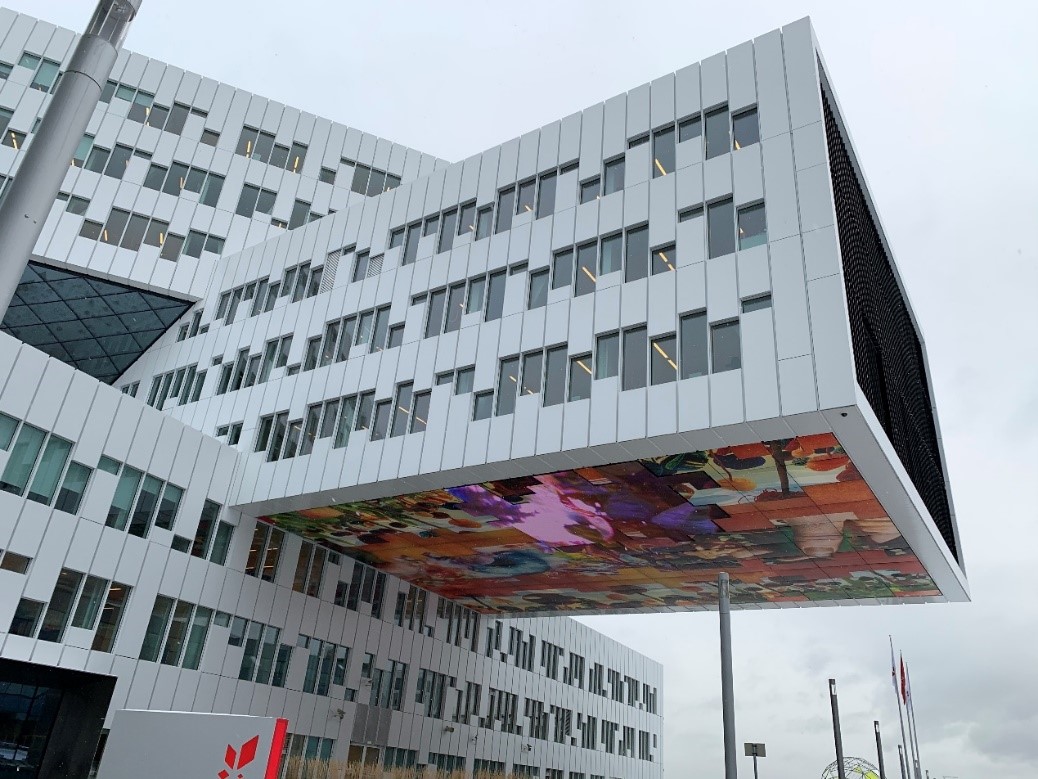