ASCE's National Capital Section operates several volunteer-run Committees responsible for administrative, technical, outreach, and special-project functions. Administrative committees include: Logistics (Manages logistics and the registration desk for Section-level meetings); Technology (Manages administrative email accounts, Website, Online storage of documents) and Newsletter (Publishes 8-issues of the acclaimed ASCE-NCS eNewsletter in PDF format). Technical committees include: Construction, Geotechnical, History & Heritage, Structural, Sustainability, Transportation, , Water Resources, and Younger Member Forum. Outreach committees include: Communication (Sends newsletter, event registration, and volunteer opportunity communications); Volunteer (Manages Engineer's Week, Life Member). Special Project committees include: Centennial Celebration, DC Infrastructure Report Card, Boundary Stones, and other special projects the Section takes on. As a member of this Section, the path to a leadership position on the Board of Directors is through active participation in our committees. Should you be looking for ways to expand your management and leadership skills, consider joining or leading a Committee. You will find the contact information for our current Committee Chairs under the Contact Us menu. 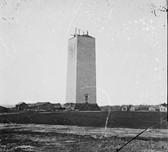 The Washington Monument undoubtedly is the most prominent of Washington's engineering landmarks.  It had recently been in the news following the August 23, 2011 M5.8 earthquake in Mineral, VA that caused minor damage to the structure. 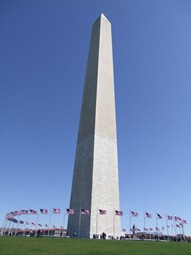 The monument is an outstanding example of the art of masonry construction and foundation engineering.  It stands 555 feet, 5-1/8 inches tall on a raised terrace.  The base of the shaft 55 feet square and the walls 15 feet thick. At its top the shaft is 34 feet square with walls 18 inches thick. The outer face is marble with a granite backing up to the 452-foot level where from that point the walls are marble throughout.  It is topped with a 100-ounce aluminum tip lightning-rod 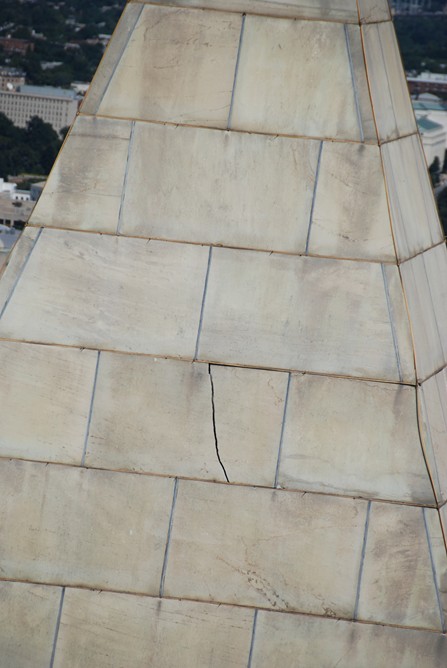 The original foundation was 24 feet deep excavated from bluestone rock.  When work resumed the Corps undertook to underpin the existing foundation and thus reduce the weight per square foot on the subgrade material.  The final foundation depth became 36 feet.  The monument was completed in 1884 and opened to the public in 1888. A steam hoist propelled the first elevator in 1901.  It has since been replaced by an electric one. The stability of the work has been remarkable.  The sway of the monument is one-eighth of an inch in a 30 mile per hour wind, and the total settlement has only been 4 inches since construction began.  On the interior, in addition to the elevator, is an iron stairway with 898 steps.  On the exterior the color difference marks the level where work was halted in 1854.

The monument lies on an east-west axis between the Capitol and the Lincoln Memorial and is currently maintained by the National Park Service.  It is still the tallest masonry structure in the world.  The American Society of Civil Engineers designated the Washington Monument a "National Historic Civil Engineering Landmark" in 1981.  The plaque is located at the top observation deck of the monument on a screen at the top of the stairs descending to the lower level for the elevator.

Note: interesting photos of the monument during and after the earthquake can be found at the National Park Service web site.