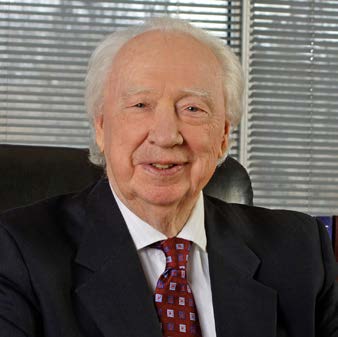 For the month of October 2015, we spoke with Mr. Sidney Dewberry, P.E., L.S., Dist.M.ASCE. Mr. Dewberry is a Founding Partner and Chairman of Dewberry, an 1,800-employee firm. Mr. Dewberry’s engineering leadership has been recognized repeatedly with appointments to influential strategic planning commissions in the National Capital Region, including the Greater Washington Board of Trade, the Governor’s Regional Economic Development Advisory Council for District 6 (N. Virginia), the Air & Space Heritage Council, and the Northern Virginia Transportation Alliance. Mr. Dewberry is the former chairman of both the Arlington County Planning Commission and the Fairfax County Engineering Standards Review Committee.

What do you consider your major achievement(s) in civil engineering in our Section area?

A hard question as my company and I have been involved in so much in this region. Let me list the achievements that include specific projects. While some of these are not directly related to civil engineering, I feel civil engineering has given me the foundation to successfully execute these projects:

So, what do I consider to be my major achievement in civil engineering in this region? It’s like asking one to identify one’s favorite child. They are ALL my children!

I didn’t “decide” to become a civil engineer. It just came naturally. My father was a superintendent for the erection of steel truss bridges in North Carolina, Virginia, West Virginia, Pennsylvania, and Maryland in the years 1900–1930, and I had an older brother who became an electrical engineer – so becoming an engineer was in my genes.

What I hear the most from young people is their apparent difficulty with math. If one can develop a love for math early in life, a whole world will open up for him or her – not just in engineering but in science in general. This is a challenge to our educators. I’m not particularly proficient at math but my high school sophomore teacher let me be the star in presenting plain old geometry to the other students. This thing alone made me a star in the 9th grade. One teacher singled me out, even though I wasn’t very good at it, and she taught me to not fear math. That’s all it took! Today’s students would find that math is really a very logical and easy subject, if our teachers would just instill in them the reality that there’s nothing to fear in its study.

I believe the major challenge for an individual pursuing civil engineering to be getting through the early years of training. First, engineering is not an easy choice in college. It’s tough and one has to struggle to get through the rough years of physics, chemistry, electricity, calculus and all the other courses that require deep concentration and study. Then, after college, there are the several years of internship before one is turned loose to work on projects completely on his or her own.
A very real challenge for civil engineering is finding the money to make projects happen. Today our tax monies are used up by so many social needs that little is left for much needed infrastructure, repair, and replace, as well as for new infrastructure.