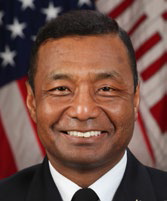 The NCS Centennial Engineer of the Month for January 2016 is Lieutenant General (LTG) Thomas P. Bostick. LTG Bostick serves as the 53rd U.S. Army Chief of Engineers and Commanding General of the U.S. Army Corps of Engineers (USACE). USACE oversees most of the nation’s navigation and civil works water resources infrastructure and military construction. In this role since 2012, LTG Bostick is responsible for more than 33,000 civilian employees and 700 military personnel who provide project management, construction support, and engineering expertise in more than 130 countries around the world.

LTG Bostick graduated from the United States Military Academy in 1978 with a Bachelor of Science degree. He holds a master’s degree in both Civil Engineering and Mechanical Engineering from Stanford University, and is a graduate of the U.S. Army War College. He is a registered Professional Engineer in Virginia. ASCE-NCS is proud to have such a distinguished member of our military and NCS member designated as our Centennial Engineer of the Month.

What experience(s) have you found most memorable and/or rewarding in your career?

That is a difficult question to answer because I have enjoyed all of my experiences. From 2nd Lieutenant to Lieutenant General, I have not had a bad assignment.

I have a unique background in that I grew up on the combat side of the USACE, in the Engineer Regiment, and spent an equal amount of time at the strategic level. I served in the V Corps, 8th Infantry Division, 1st Armored Division, 1st Infantry Division and 1st Cavalry Division. Despite my troop experience, I have served in Washington D.C. during every rank of the Army from Lieutenant to Lieutenant General, so I have benefited from great opportunities to learn at the strategic level. I served as a White House Fellow in the Department of Veterans Affairs, Executive Officer to the Chief of Engineers, Executive Officer to the Army Chief of Staff, and in the National Military Command Center on the Joint Staff in the Pentagon during 9/11. I also served in personnel for nearly seven years, with four years in Recruiting Command and almost three years as the Deputy Chief of Staff for Personnel (G1), before becoming the Chief of Engineers. I have always enjoyed challenging assignments where we have accomplished the mission through great teamwork and leadership.

One of my most enjoyable assignments was my time with the 54th Engineer Battalion in Wildflecken, Germany. This was my first assignment in the Army, where I was fortunate to meet and marry my wife, Renee, an American School teacher and now Principal of Randolph Elementary School in Arlington, Virginia.

I have had other memorable assignments including deployments to Bosnia and Iraq. In Bosnia, we built a strategic airfield, a hospital, billets, cafeterias, conducted de-mining operations and so much more. I had the honor of conducting the 55th Anniversary of the D-Day Invasion while at the same time deploying part of our brigade to Kosovo. Later, after deploying with the 1st Calvary Division as the Assistant Division Commander, I transitioned to work with the US Army Corps of Engineers and commanded the Gulf Region Division. We started approximately $11 billion of construction.

During my time as the Chief of Engineers, it was certainly rewarding to continue the completion of the Hurricane Storm Damage Risk Reduction System in New Orleans and see it perform as it was designed during Hurricane Isaac on August 29, 2012 – seven years to the day after Hurricane Katrina. This year we observed the 10th anniversary of Hurricane Katrina. The USACE won the ASCE Outstanding Projects and Leaders Award for the one of the key components of the system, the Inner Harbor Navigation Channel.

The Nation came together very well after Superstorm Sandy from the President, to Congress, Cabinet Secretaries, Governors and Mayors, U.S. Northern Command, the Department of Defense, the Army and the USACE, and many more. It was a very impressive response and recovery. The post-Sandy construction has been executed superbly. Together with many experts, USACE produced a seminal document to address climate change and coastal resilience in producing the North Atlantic Coast Comprehensive Study.

How did you come to decide on studying civil engineering?

I have always enjoyed math, so engineering was a natural fit for me at West Point. Then, I had a wonderful opportunity to attend graduate school at Stanford and return to West Point to teach mechanical engineering. Although I was sent to graduate school to study mechanical engineering, I always thought that having a civil background would be helpful. I had to overload my course schedule, but ended up completing double master’s degrees in mechanical and civil engineering. I have enjoyed the opportunity to teach and use some of these skills during different parts of my career.

What guidance or recommendations do you have for younger civil engineers or those considering entering the profession?

If a person has a passion for engineering, it may not be clear which type of engineering is the best fit. I really did not know the difference between a mechanical and civil engineer when I started going down the path of engineering, and I think that was okay. By taking different courses and perhaps visiting with a variety of engineers, a person’s passion will begin to develop and become clearer. If a young person is fortunate to know exactly what they want to do, they are well ahead of where I was at that time in my life.

Regardless of the type of engineering discipline one chooses, it will require a lot of work. I always tell young people that anything worth doing is often going to be challenging, so hang in there. Discipline, hard work, and perseverance are always rewarded.

What challenge(s) do you feel are most pressing for civil engineers to address in the future?

Like any profession, our success starts with people–how they are recruited, retained, trained, developed, and ultimately retired. Taking care of our people is so important. The Nation will always need civil engineers, and part of the duty of those currently serving as engineers is to inspire others. This inspiration must start early in elementary school.

Second, I would say that our profession relies on the technical expertise of our civil engineers. We should set the bar high on expectations and the need for lifelong learning. We must be a moral and ethical profession capable of self-policing and looking inward, to ensure that our work is of the highest caliber and valued and trusted by the people we serve.

I would ask our young engineers to think of not only the short-term challenges we face, but also help the Nation think through our future. The aging infrastructure challenges identified by the ASCE and others will not be solved in the next few years, but we should work diligently each day thinking about the future and how we create an infrastructure that will be here for the next generation and the generation after that. I am confident that by working together, we can do this.