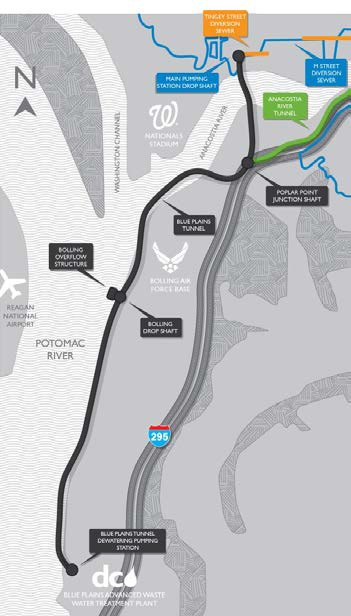 The construction progress of the Blue Plans Tunnel was the subject of the February 2015 NCS Section Meeting. The Blue Plains Tunnel is the first segment of the DC Clean Rivers Project; DC Water’s $2.6 billion infrastructure project designed to reduce combined sewer overflow into the District’s waterways by 96%. Two to three billion gallons of untreated combined sewer overflow (CSO) containing bacteria and trash that are harmful to the environment is discharged into Washington, DC’s waterways annually. CSOs occur during heavy rain when the mixture of sewage and stormwater cannot be contained in the sewer pipes and overflows to the nearest water body. To solve this century-old extensive problem, DC needed an engineering solution on a massive scale. Enter the DC Clean Rivers Project; DC Water’s ambitious $2.6B undertaking driven by Federal Consent Decree to construct a deep tunnel system to reduce CSOs by 96% and transport the captured flow to the Blue Plains Advanced Wastewater Treatment Plant. The Blue Plains Tunnel is the first phase of this mega-project. Currently underway, the project features construction of five deep shafts ranging in diameter from 50 to 132 feet and Lady Bird, a 26-foot diameter tunnel boring machine (TBM), currently carving out 4.5 miles of tunnel that will dramatically improve water quality in the Anacostia River. As the largest underground construction project since Metro, the Blue Plains Tunnel marks the beginning of a new era of tunneling and underground construction in the District. DC Water is employing modern TBM technology and innovative shaft construction techniques.

James Wonneberg and Ryan Payne from the construction management team of the project presented on the methods used to construct the tunnel and associated deep shafts. James Wonneberg, P.E., CCM, is the Resident Engineer responsible for construction management of the Blue Plains Tunnel since 2011. Ryan Payne, P.E., is the Field Engineer responsible for geotechnical and tunneling aspects of the project including analyzing tunnel boring machine (TBM) performance, construction oversight of the tunnel and shafts, and the deployment of DC Water’s real-time TBM data monitoring and reporting software.

Mr. Payne elaborated on the details of constructing of the Blue Plains Tunnel and the associated deep shafts. He presented an overview of the different methods used to construct the slurry walls, base slabs, and the final liners of the shafts. Mr. Payne also described Lady Bird, the earth – pressure-balance TBM currently constructing the tunnel. The TBM’s production cycle, which includes mining, spoil removal, and installation of the 6 foot precast tunnel rings was reviewed.

For additional information about the Blue Plains Tunnel and the other projects associated with the longterm control plan, please visit the DC Water Webpage on the DC Clean Rivers Project.

We have 121 guests and no members online