Fort Myer is that postage size US Army post adjoining Arlington National Cemetery. It has been continuously occupied since May 24, 1861 and in its history has seen the likes of the Wright Brothers, Alice Roosevelt, Charles Lindberg, George Patton (4 times) and Jacqueline Kennedy accompanied by Caroline. Underneath its soil are mysterious rock walls of unknown origin, remnants of the White House and the Pentagon. It once housed the Army's 'Society Circus' under the command of George Patton who built the famous Old Post Chapel and also once had Radio Station WAR on its land towering some 600 feet above Arlington County. Spies have visited and have almost been arrested on its grounds. Railroads ran through it, tanks trained there and horses still live there along with the Chairman of the Joint Chiefs of Staff and the Army Chief of Staff. The last of the famous 'married quarters for NCO's and their families' built by General Montgomery C. Meigs is still on post as well as in a John Wayne movie. 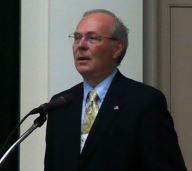 Our speaker is Kim Bernard Holien, who in 1995 became the first, and only, historian of Fort Myer for 18 years. Kim worked 41 years in Federal Service to include four Top Secret positions and 34 years as an Army Historian. For his work he received some 200 awards to include personal ones from President Reagan, Secretary of Defense Weinberger, Secretary of the Army Marsh, Chairman of the Joint Chiefs Dempsey and three Chiefs of Staff of the Army. Kim has four university degrees and is the author of one book on the Civil War. He was the civilian historian for Staff Rides (in helicopters) to five major Civil War battlefields for the Secretary of the Army and the Army General Staff. In addition he was the Historian for the MacArthur and ANZUS Treaty Corridors in the Pentagon which were one year projects done in ten weeks.